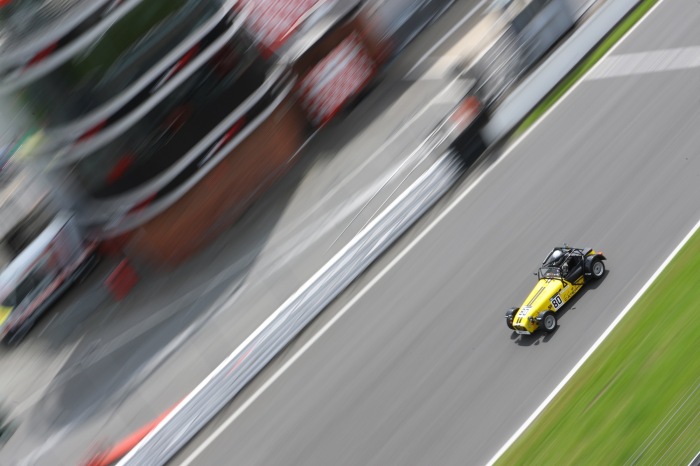 Brands Hatch will always hold a special place in my motorsport career as it was the place it all started. From watching BTCC with my dad as a kid with dreams of being a racing driver. Right through to it being the venue of my first ever race in last years Caterham Academy

Overall it was an outstandingly fun weekend. For a whole host of reasons. The banter and friendships in the paddock. Every round feeling more at home racing the car closer and closer to each other and the limit. It’s basically just really cool being a racing driver!

Congratulations to the podiums in both races as you really had to work hard for them!

Brands is a short track at only 1.1 miles. Which meant with 30 cars lapping at under a minute per lap trying to get some clear was always going to be a challenge. During testing the usual seven suspects were the faster drivers. However if anyone failed to get a clean lap there could easily be someone very disappointed in their position for the start of the race. 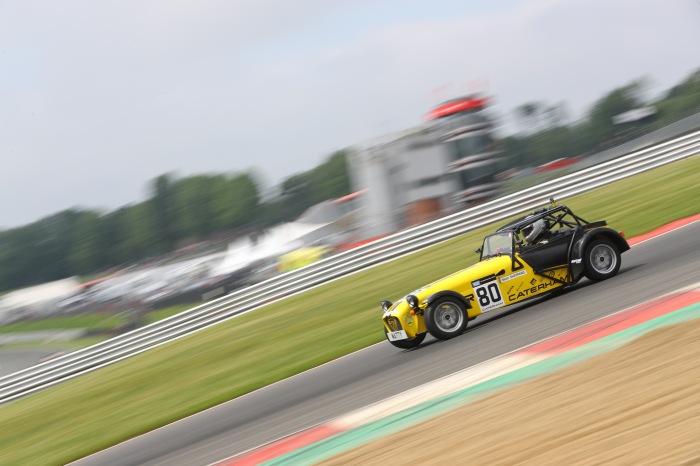 Some slightly slower people basically started an earlier than expected quali queue. Mostly that wasn’t a problem as they let the faster cars past so they could then follow us to benefit our tow. A couple of drivers were less willing to let the faster cars through which is their right but it did mean the first 15mins of the 20mins quali session were a bit of a write off just trying to get some clear air.
Finally I managed to find some clear(ish) track. I was closer to the car in front than I wanted but far enough away that I hoped to improve. I ended up setting a 54.87.  At the time I was disappointed and thought that is me stuck at the back of the fast group. Since that time was over half a second slower than we had been in running around in testing.
I was shocked and happy when the session ended and I had managed to get pole. It would put me in a good position for the start of the race. I just needed to try and stay ahead during the race. 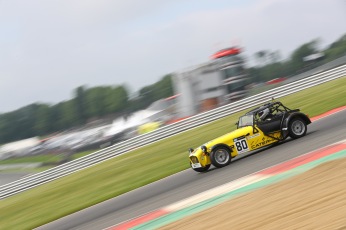 It’s always a great feeling leading the pack around to line up on the front row. I got a ok start but had dropped to 3rd by the second corner. On the run down to Graham Hill I decided it wasn’t worth fighting hard with Dan F as I knew he would be quick enough and settled into 4th place. During the first few laps I was happy saving my tyres and letting the cars in front do all the work. The four of us started to pull a small gap away from GMac and the pack behind. Typical just when I thought it was going to be a easier race Dan H attacked James into Druids and had a bit of a slide. Bunching the whole group back together and allowed GMac to attack me into Paddock Hill. I didn’t close the door quick enough on the run up to Druids allowing GMac to sneak through. 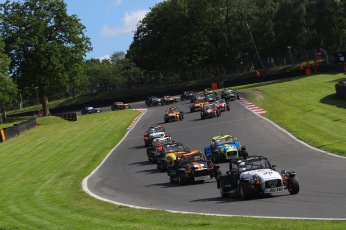 GMac I swear has a wider car than most as he seems to know exactly where to put the car. Making it difficult to get past and the rest of the race was spent trying the outside of most corners try to find a way past. Eventually I did manage to get him down the inside of Paddock Hill but he had a better run up to Druids and some how I ended up getting pushed onto the grass in the braking zone. Lucky it was only a gentle nudge with GMac and we both managed to carry on. Annoyingly at this point Sam had broken down on another point of the track and the race was red flagged a few laps short of full race distance.

When you get a red flag the final result is decided by where you were placed a lap ago which means I ended up with 5th. Not the result I was looking for but Brands was always going to be a tough race.

I started on the 3rd row in 5th place. I didn’t mind this as it gave me the inside line for the first 2 corners. All I need to do was get an ok start and defend the inside line and I should be ok. Dan H got a poor start from 2nd and I got promoted to 4th place. For some unknown reason the Sunday race always seems a little more closer than the Saturday one. I guess it’s because the drivers are more in the grove. Possibly in some cases it’s because they know they don’t need to finish well for the second race and are more willing to take risks.

Like the previous race the front 4 started to pull away again and I was happy sitting in 4th biding my time and tyres ready for a fun race later on. Right on cue it all got a bit chaotic as Dan F who was leading managed to get stuck in gear. At race pace this meant that Graham went it the back of Dan F, James hit GMac and I had to back off. Within the space of a straight Dan F had gone from 1st to 9th. GMac I think was now 5th. James was 1st. With both Tom and I alongside him coming into the first corner. At this point I didn’t fancy being the middle of a Caterham sandwich and decided that 3rd was a safer choice. Annoyingly Dan H was behind James on the inside which cost me 3rd. However in the grand scheme of things it was only 3mins into a 20min race so plenty of time to move forward. GMac was the next car all over me and eventually he got past me.

What happened next was really unlucky. I could see Dan F behind me who was on a charge from his early gearbox issues. Now I knew that Dan F might try a really late inside move into Paddock Hill. So I made an extra point of driving closer to the edge of the track down the main straight and I thought made it pretty clear that I was going to be on the inside an if he wanted past he would have to use the outside which was plenty wide enough for 2 Caterhams and a bit. While the inside line I left myself about a 1/3 of a Caterham width or less to give me some space to manoeuvre. Dan F on the other hand thought the inside was the way to go and we hit each other.
Normally Caterham wings get knocked off all the time and you just carry on. Annoyingly mine got wedged back in on itself and started to burn off the tyre tread. I carried on for a couple of laps with white smoke billowing out the back of the car hoping it would fall off. That never happened, at this point I didn’t know how much tread I had left so decided to retire the car instead of risk a high speed blow out. Not quite the finish I wanted but the rest of the racing from everyone else was epic and people will talk about how close the finish was for a long time. Just a shame I didn’t finish it! 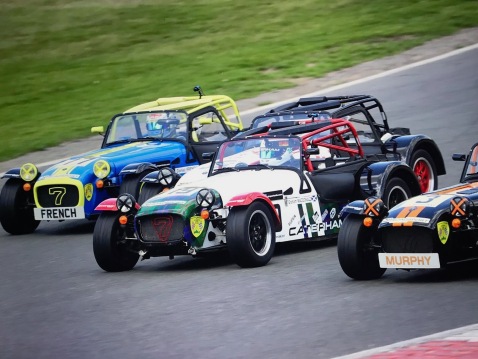 It’s very easy to get annoyed or disappointed about racing results. Especially the closer you get to the front. However at 100mph+ everyone is making split second decisions and things will go wrong for everyone at some point. If everyone can shake hands and have a beer afterwards that’s all that really matters. After all we are doing this for fun and will in years to come look back on these years and reminisce about when we were racing drivers.

Next round will be in Zandvoort which I’m really looking forward too. Since I generally always do better on the longer faster tracks than the tight twisty ones. Hoping to get back on that podium!

Photos as always from the excellent Jon @ Snappy Racers.com