Blue sky greeted us at Anglesey for the BRSCC Winter Race Day for an end of season day of mixed class racing. Like last year it was a mix of Radicals, Caterhams and tin tops.

As it was a mixed class quali the best I could hope for was 4th. Given Dan French and I were likely to be the fastest Caterham on track it became a battle between the two of us for the coveted Caterham class pole. Our plan was to go out together and take it in turns to lead the other around to give each of us a fair tow. I totally messed that plan up by leaving the pits thinking Dan was behind me only to find out a few other cars got in between us (sorry Dan!). I decided to push on and clear the traffic to get into some clean air followed by some fast laps to see what I could do with no tow. At which point Dan should have cleared the slower cars and I would back off to wait for Dan to catch me then we could spend the second half of the quali working together. I could see Dan progress and had literally just slowed down to wait for him and the red flags had come out and stopped the session.

The red flag meant we had to return to the pits and wait for quali to be restarted. The good news is Dan was now behind me. The bad news was there were several slower cars we found ourselves behind in the pit queue. So much for best laid plans! First rule of racing is plan for everything but don’t expect any of it to actually happen the way you wanted.

After the quali restarted Dan and I made quick work of the slower cars and we had a few laps to help each other in the tow. This worked pretty well for Dan as he managed to use my tow to set a faster time. I on the other hand despite following Dan didn’t improve on my earlier time set in clear air because I misjudged the gap. Still was happy with my pace as I knew it was going to be a fun scrap in the races.

At the start JJ got an amazing start and blasted past me while my start was pretty tardy. Annoyingly I had finally worked out my race starts but a gearbox rebuild and a new clutch has meant that the biting point has changed slightly. That’s my racing drive excuse anyway! For the first lap I followed JJ around but knew I had to get past him. Before Dan had an opportunity to make a gap too big for me to close. After getting passed JJ I set about trying to chase Dan down.

The tow effect in a 270R is less than in the Roadsport due to the removal of the windscreen. Which means that it take a lot more work to catch up with people. I was faster in some parts of the track while Dan was faster in others. Eventually I caught him up and managed to overtake after a bit of a battle the safety car was deployed to dig poor Al out of the mud. I knew that once the safety car went in Dan would go back on the attack and I just needed to hold him off for a few more laps to take the effective Caterham 1st place kudos. On the restart we both ran wide on the first corner and I just about stayed on the track. Dan behind me was less fortunate and had a ‘moment’ which gifted me a couple of seconds lead. At this point I knew I could win the battle as long as I didn’t do anything stupid. Typical at this point some back markers started to play their part and it was a case of being forceful and getting past without losing too much time to Dan.

I might have ‘only’ finished 4th on the road behind 3 fast quicker cars but to be first in the Caterham class felt like the victory I had failed to get all year. Also got the fastest Caterham lap as a bonus.

One of the faster cars didn’t take part in the second race which promoted me to 3rd on the grid along side Dan French in 4th. It was pretty cool lining up behind two radicals. Despite getting a better start than race one, JJ still managed to rocket past me. Not wanting Dan to get away I got past JJ on the first lap and decided to sit behind Dan for a couple of laps so we could get in some fast laps and build a gap from the rest of the pack. Once Dan and I had gapped the rest of the Caterhams it was time to play. The rest of the race was an epic battle where we traded places multiple times a lap and it was one of the most fun races this year.

Dan ultimately beat me after I overcooked an overtake on the last lap and locked up. Slightly annoying to mess up but that is motor racing. It turned out one of the Radicals has been disqualified which promoted Dan into 2nd and I got 3rd. Picking up a trophy was an added bonus. I did lose out on the fastest laps kudos to Dan by 0.001 seconds. Which really showed how close it was! 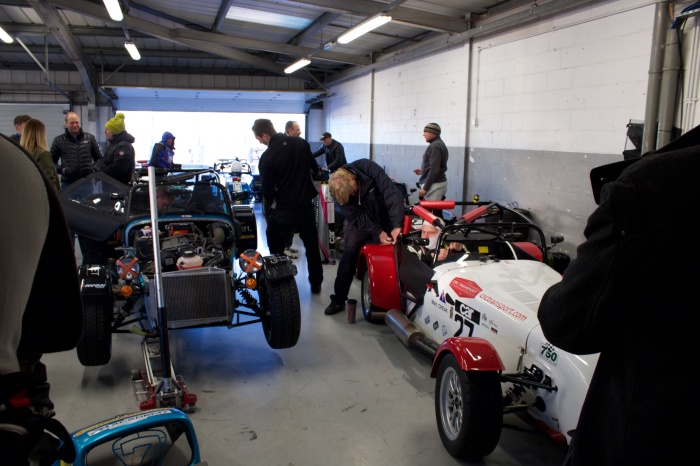 The Caterham Roadsport season might be over but there are still some end of season racing to be done.
One of those is the 750 Motor Club Birkett 6 hour relay race at Silverstone. I did the race last year in a team of six Roadsport cars we came 48th out of 60 on the road and 31st in the handicap race. We got the band back together with most of the original team to have another go with 270R cars. From this years Roadsport drivers we had John, Adam, Mark and I. Matt C & Paul were both back on track having missed a year of Caterham racing. Mark unfortunately broke his car at Thruxton so was not racing but kindly still came along to help my dad out with the team management stuff and running the pit wall.

Both Mark and my dad deserve a lot of credit and thanks for standing out in some pretty abysmal weather to time our laps and hold out the pit board. It must have rained for 4 hours straight. Before that it was wasn’t what I could call warm either!

Out of the 66 teams we started 44th would run as high as 22nd and finish 25th. In the handicap we finished 17th. However we were 3rd at one point and if it wasn’t for a stop and go penalty we could have potentially got on the podium for the handicap race. Given most of the race was wet and most of the team haven’t done much wet racing it was a great result. The stop and go was unlucky but that is racing.
So big improvement on last year… along with a reason to come back next year. Each year we get better with the tactics of endurance racing.

The team agreed I would go out first and pull a double stint doing all my track time in one go. The logic being that at the start in theory all the cars in front of me should be faster and there will be a lot of them. Which meant I should be able to use those cars to get a tow and fight my way forward. Unless a safety car came out and it made sense for me to pit earlier.

In the Birkett the starting order is based on your team predicted speed and it’s a rolling start. I found myself in the middle of a pack of tin tops so being seen was going to be my biggest challenge.
I was lucky in my stint as I had a dry track while everyone else in the team got very wet. The 270R was brilliant and it turned into a busy race where I got past around 20 car less than an hour. My session got cut short due to a safety car and I spent the rest of the day being a mechanic for the rest of the team. Given the amount of rain outside I was more than happy to hang up my racing boots for the day!
The rest of the team did a great job of keeping the fast pace.
Hopefully will be able to do the race again next year.