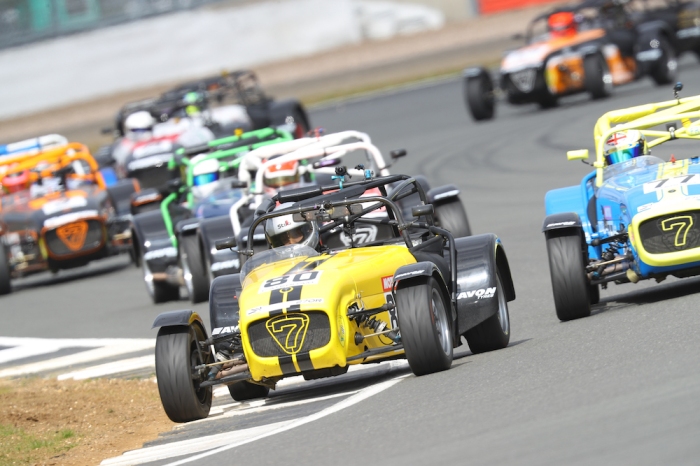 After the winter break the Caterham 270R Championship kicked off in spectacular style on the Silverstone National circuit. The two 270R races were more akin to Nascar racing as the entire field lapped as one group. Never knew you could get 6 Caterham’s wide on a track!

It’s taken me a few days to get my head around it all but I finally lived a childhood dream and won a motor race. That feeling of crossing the line first was amazing especially against such a strong field of drivers all in identical cars.

The weekend got off to a pretty good start where I managed to bag 4th place on the grid. Only 0.1 seconds off pole. Odds were that the race would be a tow fest and track position early on wouldn’t mean much. That being said I went into the race happy that I would be near the sharp end of the grid and might be part of any break away which might happen. 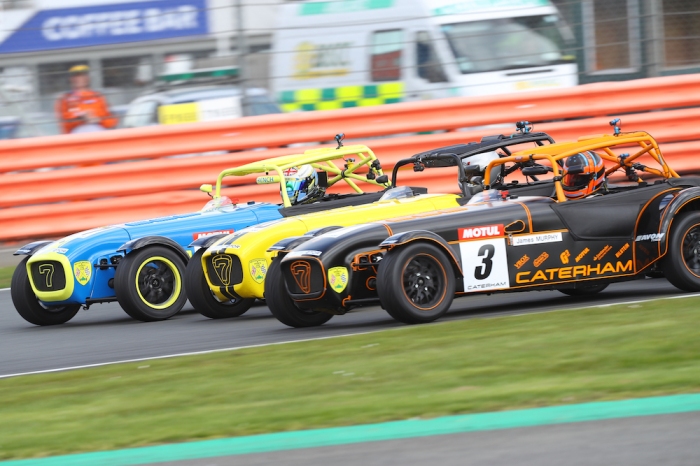 Got a good start off the line and slotted into 3rd place. Had a simple plan of stay in the lead few cars and if possible either form a breakaway on my own or with anyone else if I could. Dan French and I nearly did it a couple of times but it was impossible to pull away from the pack. The tow effect at Silverstone is frankly ridiculous. A gap which would see you clear on most tracks made no difference at Silverstone.

Over the 30min race the lead pack change order ever corner. One lap I would be leading. Next down in sixth, couple of corners later back in the lead. Having ended up second onto the final lap I knew it would be all to play for. Out of the last corner Justin, James and I were side by side and it came down to a race to the line. One that I would win by 0.01 seconds. Which as 100mph is very little indeed!

For the first time ever I started on pole for a Sunday race having won the Saturday race. Not that starting near the front makes any difference at this track but it was a nice feeling to lead the pack around to take the start. I fell into old habits and got a poor start but hung out with the lead few cars to start with. Not sure why, maybe I wasn’t totally paying attention but I found myself down in 18th after 20mins which woke me up to do something about it and 5mins later I was back in the lead. One of the great things about Silverstone is when everyone is in a pack you can find ways back into the fight. All was going well as I led onto the last lap and was confident of ending up in the top 5, possibly with a podium. 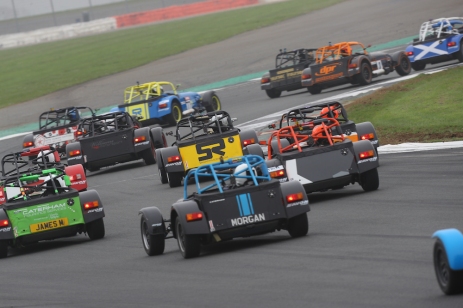 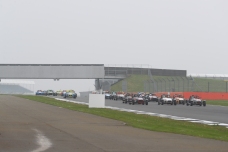 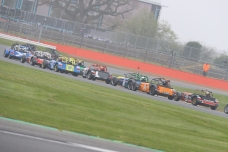 However it was not meant to be as one of the drivers made a last second move into a gap that wasn’t really there and took several front running cars out of the race, including me. The car wasn’t too badly damaged and I was able to get across line in a distance 22nd. Did consider parking it and not bothering to finish the race but decided that if the car would move it was worth salvaging any points I could. As they might be needed later in the year.

After a couple of years of almost winning it’s amazing to finally have nailed it and won a race. Hopefully it’s the first of many. Race two was a big disappointment result wise but had the pace to run at the front which is a good sign.

Next round is 4/5th May up north at Croft.