Sixth day and managed to spend a couple of hours on the car fixing some of the issues I was stuck on Sunday. The elusive handbrake parts were in the bag labelled ‘axle’ and putting that in was a quick job. The seats didn’t fit previously because I used the wrong set of seat belt mounting points on the inboard side. Totally missed the other holes because the interior of the car was not well lit. With a torch in the car it was easy to spot them. Won’t bolt the seat in yet as it would block me getting to the mounting points for the rear suspension which i’ve yet to start. At least with the seat in it is starting to look more like a car.

Make sure the cable has a loop in it

Also got around to drilling holes in the driver side floor pan so I could fit the 2 lower harness straps. The instructions don’t match up with the parts so made it up based on what made sense to me. Hopefully it’s correct. 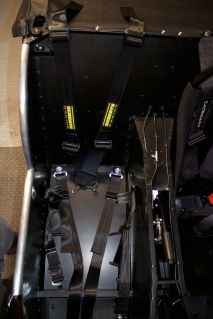 I think i’m almost out of jobs without the engine in. So next is roll cage. Then fitting the engine in at the weekend which should give me a long list of new stuff to work on.