Fifth afternoon of the build and I had a simple aim get everything on the interior of the car done and possible fit a seat or two and maybe even the rollcage.

First job was to fit the knee trim panels and rivet the side panels. Three rivets in and my riveter broke! Painfully slow trip to screwfix to pick up a replacement and I was good to go. Sometime later and several cuts later the panels were in. 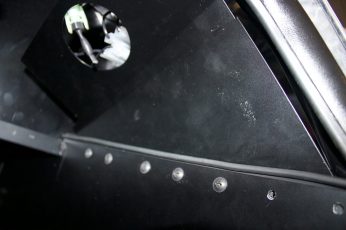 Decided to keep it simple and fit the fixed passenger seat first as I still needed to sort out the 6 point harness on the driver side. Since it was a fix seat how hard can it be I thought? Turns out not simple. The harness mounting get in the way and prevent the seat going back far enough to match up the holes in the floor pan. Either i’m an idiot or the holes are in the wrong place. At this point decided to have a tidy up and give up for the weekend.