I think I will look back at Brands Hatch track day as the day I really clicked with the car. Feeling more the hunter in the pack than the hunted. The rush of hunting down a pack of cars and finding an overtake even ‘sticking’ to the track day rules of overtake on the left is awesome.

Started off wet then dried out followed by more rain later on. After mostly wet running so far despite not knowing the track I knew how to change my lines to find the grip and how far I could push. There is still time to be found but I wasn’t a moving chicane like Snetterton. Fun Cup cars that used to lap me are now holding me up at times. As the track dried it really came alive. The new racing brake pads have made the world of difference to the car.

It was also the first time I’ve shared the track with a fair few of my fellow Academy racers and we had some awesome moments circling the track in a pack trading places. When we are racing for real it’s going to be awesome! 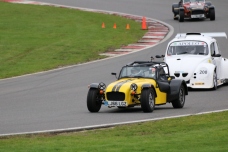